gopherd is a linux elf32 gopher server which respond to simple requests:

Unfortunaly, the server replaces the contents of any file called "FLAG" by "ACCESS DENIED"

The vuln is in the function ascii_to_bin used to transform ascii MD5 to binary MD5. A simple buffer overflow can occur because the output buffer (in the caller stack frame) is too small to handle a big string.

So by requesting a long string, we will be able to rewrite the return address of the caller function.

But there is another problem in ascii_to_bin function! The function logically uses two ascii chars to generate one bin char but iters over strlen(input_string) so it generates the good binary for the hash we send but also write len(input_string) garbage after, based on what comes after input_string that we can’t control. 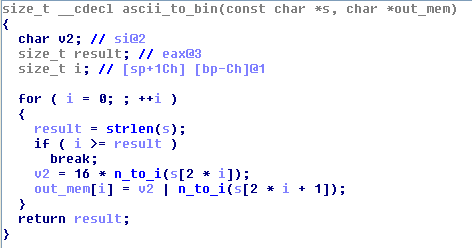 So, if we just give gopherd a hash that will rewrite the return address of the caller: we will fill the caller args with garbage. So here is a part of read_from_client:

We can see that, directly after the call to ascii_to_bin, the function calls hashlist_find with haslist_addr as first argument. hashlist_addr is an argument of the caller that have been randomly rewritten by ascii to bin.

So to pass the call function to hashlist_find, hashlist_addr need to be a valid pointer with [ptr + 4] == 0 (because hashlist_find simply iters on the values in [ptr +4] and zero will make it return immediately without any problem. An address from the beginning of .data will be perfect.

So, at this point, here is the format of our exploit string:

It seems that ROP would be a good idea here, so let’s start! The first thing to do is to set ret_addr at a pop_pop_ret address to remove hashlist_addr from the stack. After that, we will be in a totally controlled ROP environment.

BUT: there is another problem! The length of the read that the gopherd do is just 255 bytes long. And we know that:

So we need to find a stack pivot! RopMount didn’t find a good stackpivot in gopherd.

We have some nice and simple stack pivot in the remote libc!

So the attack will consist in 3 phases:

Here is the code used for each step with comments: