Lately, we’ve been having a look into java. First, we tried to understand the file-format. A java application is often presented in a .jar, which is basically a zip archive (you can also find .war files which are also zip archive). Inside this archive you’ll find several files, especially some .class files which are the one containing the java bytecode. Those files are the one we’ll look into.

The file begins with a header including the magic number (0xCAFEBABE), the minor version which is 0 and the major version for Java SE 7: 0x0033 (51.00). Every number in the class file are stored in big-endian. Right after that header, we can find the Constant Pool count which is the number of entries in the constant pool table plus one and then the array. There are several entries representing several items in the constant pool like constants, classes, etc..

After that, there is the access flag of the class, the this_class and super_class identifiers which are indices in the constant pool in order to refer to the current class and the super class. This is followed by the interface table and its size, the table contains all the interfaces from which the current class inherits. Then we find the field table and size, followed by the methods and the attributes of the class.

Here is mainly an overview of the class file. 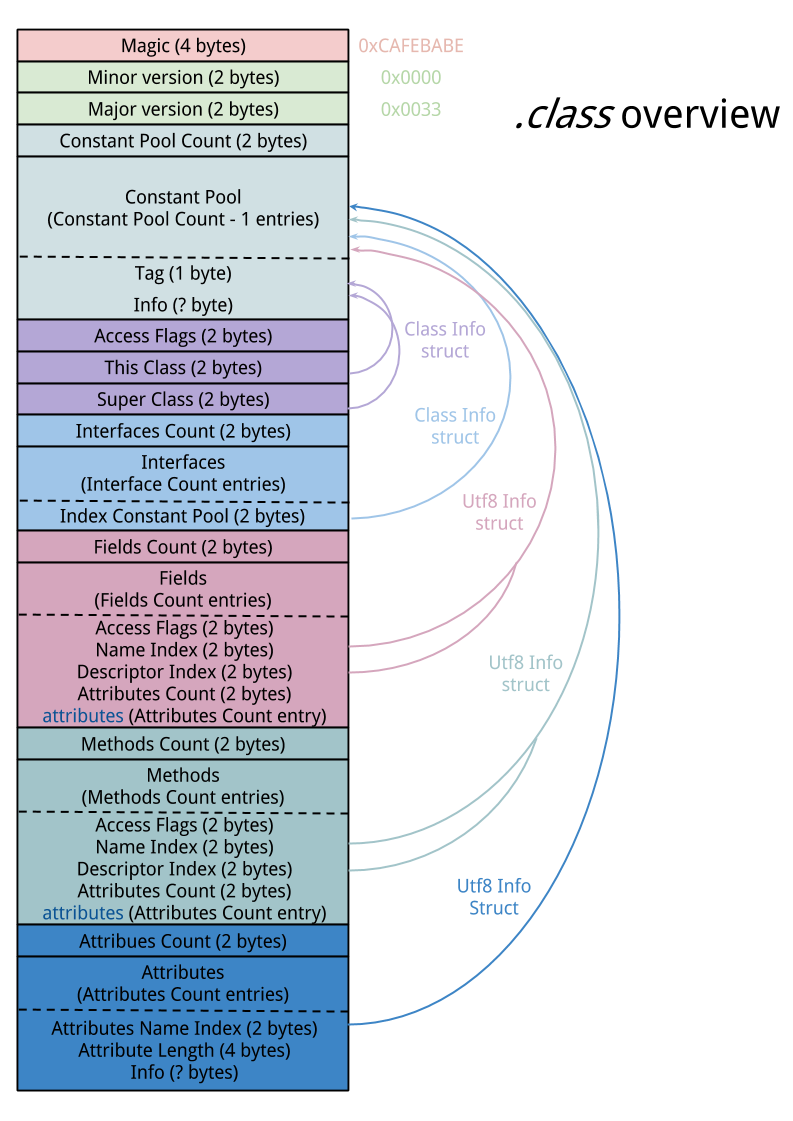 The constant pool is probably the most important part of the Class file. It contains all the information that will be needed on the other part of the file. The constant pool is an array containing several entries, the index of the array starts at 1, not 0. The different structures in the table do not have the same size, and so the constant pool may have a variable size. Each entry begins with a tag on one byte, indicating the type of entry:

Here is global overview of each of those structures: 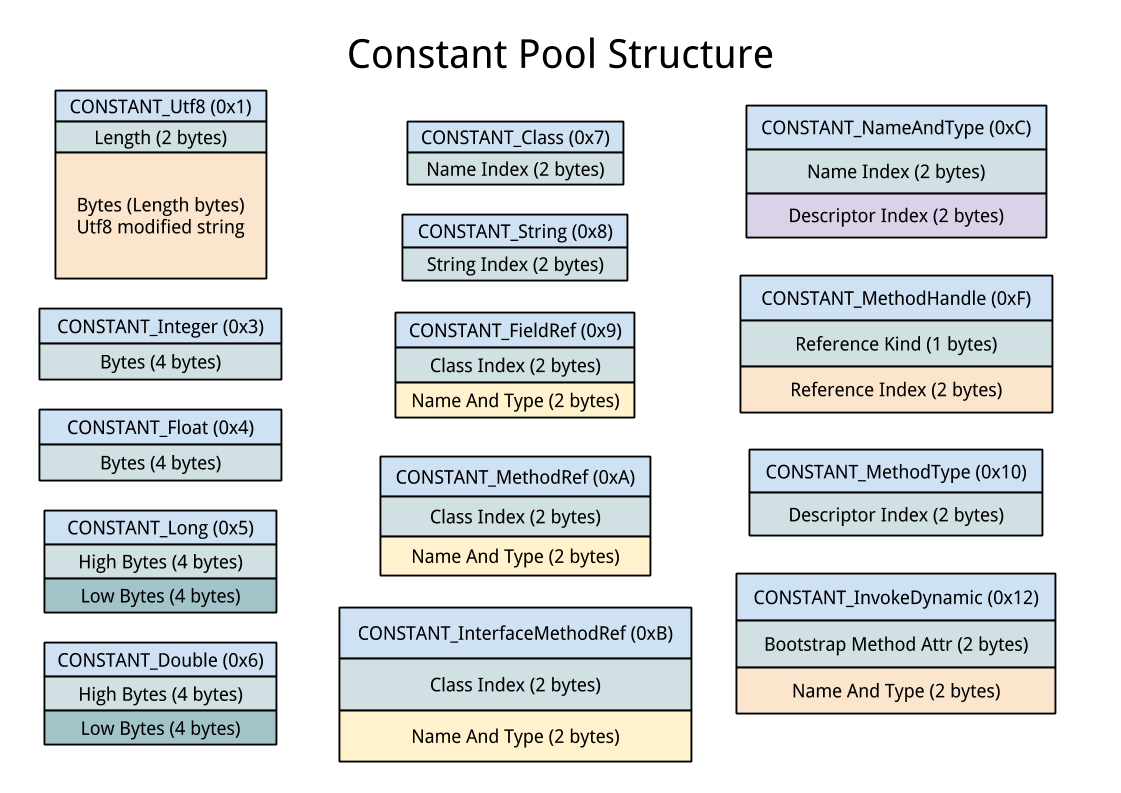 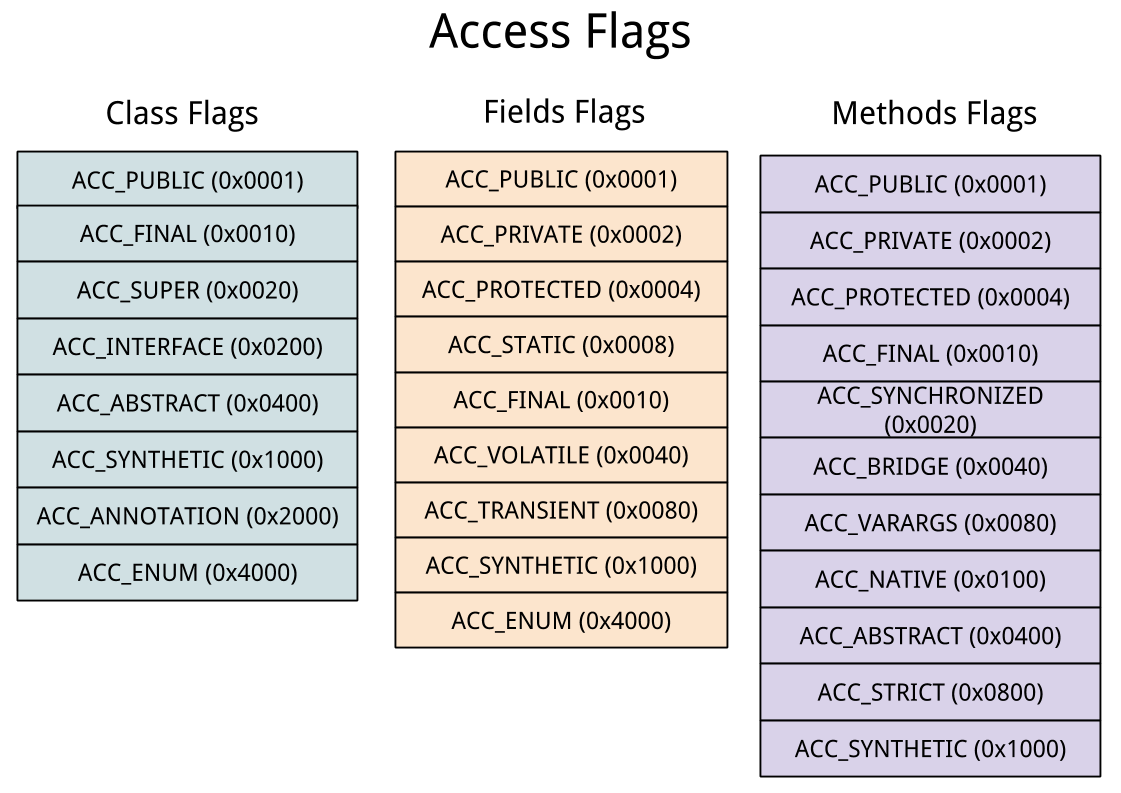 Each field, method and class have others characteristics and informations. These information are contained inside attributes. There are several attribute types, each one of them can be applied to one or several fields, methods, classes and codes. The attributes are used to represent :

Each attribute begins by an index into the constant pool, it must point to a CONSTANT_Utf8 entry telling which type of attribute this is. Afterward, since the different types of attributes have different structures, the attribute length is indicated. An implementation of the Java Virtual Machine is not necessary in order to handle each kind of attribute because knowing the length allows to pass an unhandle attribute and execute correctly the file.

The most important attribute is probably the Code: 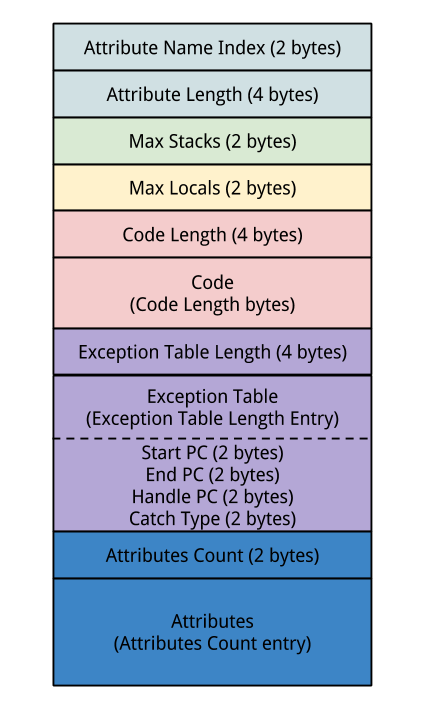 It begins with the common header, the attribute name index should point to a CONSTANT_Utf8 representing the string "Code".

It is followed by two variables: max stack and max locals which represent the stack size and the size of the local variables including the one used for passing arguments to methods. Then there is the code length and the code which is the bytecode that will be executed by the JVM when the method is called.

Right after that, you’ll find a table representing the exception handlers inside the functions, it indicates the start and the end of the zone where the exception should be catched, the start of the entry if the exception is raised and the catch type which is an index to a CONSTANT_Class into the constant pool. The catch type can also be 0, in this case it will be called with every exceptions, this is in generally used for the finally statement.

After the exceptions section, it is possible to add some attributes for the code especially about the stack and the local variable. The Code is an attribute that may contain other attribute.

The class file is really important for the JVM and having a look at the file format explains a lot of things about the way the JVM work internally.

Recently Java SE 8 has been released, there are several small differences with Java SE 7 even though the major part of the class file has not changed. In particular, it defines new attributes : RuntimeVisibleTypeAnnotations, RuntimeInvisibleTypeAnnotations and MethodParameters.

There are also several modifications in different sections changing the default behaviour of the JVM. It also adds precision and constraints to parts of the class file. The version number for Java SE 7 is 51.00 and 52.00 for Java SE 8.

We’ve written a parser of the class file format in Python3 that you can find here : java.py.

It uses the srddl module for python, available here : https://bitbucket.org/kushou/srddl