One cool way to get your hands dirty when discovering something is to try to make it do simple stuff in some stupid/overkill way.

When I first had “fun” with the Linux ELF format, I was told to call printf without using it directly, by finding which address to call from inside the binary. For this, one would start from the mapped program header, find the r_debug structure which would give the program’s link map containing the mapped libc’s base address. From it, one would find printf by iterating over the library’s symbol table and find where it is, before calling it. No syscall’s allowed, so everything must come from the process’s own memory and structures.

Recently I wanted to give a closer look at macOS, and decided to try the same thing with Mach-O binaries. This post will be a sum-up for me to remember, and for anybody that might want to learn anything about macOS in general. I will not re-explain what already exists on other websites, I’ll just link them instead.

First things first, we are looking for printf, from the libc. To find it, just write a simple program, and open gdb. There are multiple ways to determine which library we are looking for, but using info sharedlibrary and determining in which range falls printf is one of the simplest. In our case, we care about /usr/lib/system/libsystem_c.dylib.

This binary is what file calls a Mach-O universal binary, which in fact is a wrapper around multiple Mach-Os. Also called Fat binaries in the old days, they were used to mix x86 and PPC binaries in a single blob. Now, it ships libraries for both 32 and 64 bits architectures.

A universal binary consists of a fat binary header, and multiple Mach-Os. So we’ll only take a look at one of the Mach-O, the one used by our system (in our case, the first one). Here is, however, an overview of the format: 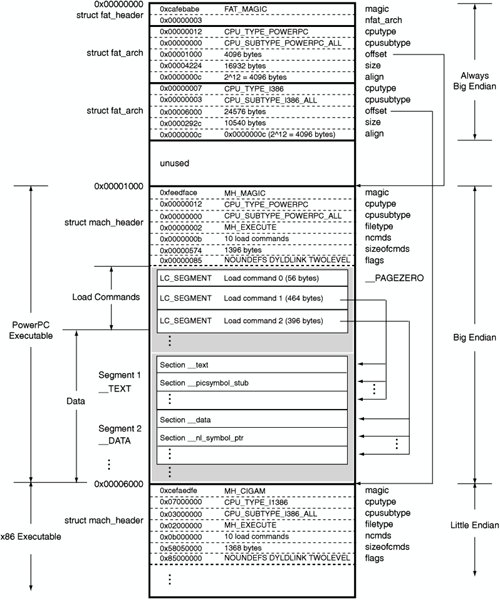 In memory will only be mapped the corresponding Mach-O, so that’s what we are going to look for in our process’s address space. We first need to understand how the dynamic linker maps it. Let’s take a look at /usr/include/mach-o/* to try to find some informations. The interesting stuff lies into dyld_images.h and loader.h. We see that the structure dyld_images.h:dyld_all_image_infos has two interesting fields: a pointer (infoArray) to an array of struct dyld_image_info, which gives us every mapped binary in memory, and infoArrayCount which gives the number of binaries in the array. We can thus iterate over these structures to find the libsystem_c.dylib address in memory.

Here are the important parts from dyld_images.h (macOS Sierra). Comments have been moved/reduced for more readability.

However, we first have to find its address in memory. The function /usr/include/mach/task.h:task_info does exactly this, but uses a mach port, which is a kernel-provided inter-process communication mechanism. It’s not exactly a syscall, but still, it’s a little bit like cheating. I don’t think there is any reliable way of doing it without (as of Yosemite at least).

Phew! We are now able to get the base address of libsystem_c.dylib:

Right. So now we have the binary in memory, let’s finally take a look at the Mach-O format. A good introduction has already been written here, so let’s not dive in too deep and directly look for what interests us, accessing the symbol table. Thus, we are looking for the LC_SYMTAB command, which will give us the strtab and symtab offsets on which we will iterate to find printf.

The process of looking up the name of a given entry in the lazy or non-lazy pointer tables looks like this:

Analysing it with jtool gives us an overview on what we are supposed to find:

However, the values recovered from memory are quite different:

And then began the SIGSEGV ballet. Something was definitely off.

Let’s take a step back in late 2009, with iOS 3.1. One change in the way iOS handled libraries was introduced by the mean of the Dyld shared cache, which combines all system (private and public) libraries into a big cache file to improve performance. On macOS, the same thing happened. The shared caches live in /private/var/db/dyld/ and regroups a lot of libraries (~400 for Yosemite and ~670 for Sierra, as for the x86_64 versions). The file format isn’t documented and changes between versions, so we must trick a little bit. Some informations about it can be retrieved using jtool again:

On Yosemite (and probably other versions that I didn’t look at), the cache memory mapping differs from the file layout: as can be seen using jtool’s output above, the TEXT mapping is after the DATA, while it is the opposite in the file layout. This was put back to normal between Yosemite and Sierra.

Among these cached libraries is our libsystem_c, and thus we simply understand that the {str,sym}tabs offsets are from the beginning of the cache file.

Finding it on Yosemite was not trivial without issuing syscalls, and I thus went for the stupid way: I first found the loaded library with the smallest load address (the first one contained in the shared cache), and got back into memory until finding the shared cache magic string (dyld_v1 x86_64\0).

On Sierra, however, one can observe that the dyld_all_image_infos structure contains a nice field named sharedCacheBaseAddress. I used it to avoid memcmping more memory.

With this, we can find the symtab, iterate over each of them and check the corresponding strings, looking for _printf.

The final code, compatible with at least Yosemite and Sierra, is available here.

I may have skipped some informations. I read way too much from different sources to be able to put everything down. If anything is unclear, feel free to ping me by mail or twitter.

The shared cache is loaded in memory at boot and is the same for every process. Even if affected by ASLR, it will not be re-randomized on a per program basis, and thus any program leaking addresses from it actually leaks system-wide addresses, which is nice!